We rise at 4:30 and move with few words through our individual departure routines. For me: a shower (I never look so lovely as my wife in the morning), a cup of coffee, a quick breakfast. We meet at the door, carry-on backpacks zipped; confirm that we have photo ID’s and pre-printed boarding passes; then lock the house to join our duffel bags tossed into the car the night before.

It is dark, driving to the airport. Early, early morning has such promise, and all the more so when you’re departing for another place. I love it as much in the middle of my life as I did in my early 20s. Perhaps more so.

At the airport, Lauren waits with the bags while I maneuver back into traffic for weekly parking. Gray light now suffuses the scenery, giving shape to the cars and concrete structures not lit by towering, scatter-shot street lights. I find a parking space between two cars, an SUV and an SUV. It’s a tight fit. Aren’t all the choice parking spaces at airports? Takes me three back-and-forths to angle in, and I’m sad that I no longer possess the grace of a young driver, one who could nail the space’s angle in an even, one-handed turn.

Even at this hour, the air heaves with humid, late-summer heat. Sweat dampens my back and shirt where my carry-on backpack rests. I trudge toward the shuttle stop, eyes down, when reddish-orange light begins to enliven the gray. I stop, look east toward the source. The sun rises as a slit above the distant treeline. It climbs fast enough that I have time to watch its ascent until the star inflates to a full circle, huge on the horizon.

I remember a morning in San Sebastian, Spain, in July, 1989.

I was 22 and backpacking through Europe with money I’d saved working through college. This morning, I would board a train, make some connections, and meet two friends — Chuck and Katharine — in Paris. We did not form a complicated triangle; we were a platonic trio, ideal traveling companions.

I awoke early, gulped a cafe au lait and wrapped two bread rolls in a paper bag and thanked my hostess and walked into the dawn streets of the city’s historic district for the train station. I arrived early and sat on a bench. I smoked then and lit a cigarette and the smoke did not move in the air. I also remember thoughts of going somewhere else. No harm would be done. (We made plans in Madrid a week before to rendezvous at three outside a Paris train station. We would wait one hour. No shows meant plans had changed.)

But I felt like company. I broke bread, found water and boarded the train. I could stay in Paris for a couple days, or less.

That summer, I bought and carried used books with me, read them, gave them away and 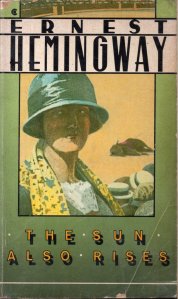 bought more. But I could not part with a battered paperback edition of Hemingway’s The Sun Also Rises. (It is in my library today, a Greek ferry ticket inserted as a bookmark.) Hemingway is not my favorite writer today, but he was one of them in 1989, and the parallels are obvious: American expats — friends and paramours — traveling Europe, meeting up (or not) in train stations, exhausting our share of food and drink and the sights of towns, and then parting (or not) for other places. I fancied myself a writer then. I spent time with other writers and drank too much and held court at sidewalk cafe tables and kept moving, always, hangovers be damned.

The train was empty, and there were no people on it. The windows in my car were open and the air was still and when the train lurched, right on schedule, and pulled from the station and picked up speed entering the countryside, warm wind blew rural scents through the car: brush-fire smoke, manure, earth. The sun rose, and I watched it, my head bouncing gently against the window. The moment was sublime. I was happy.

I’ve held many jobs as a writer, most work-for-hire. I was happiest as a travel writer, something I did for many years. Bruce Chatwin writes in The Songlines of his years of “fantastic homelessness.” I understood. When Lauren and I married and settled in our hometown, I would ask her, again and again, to promise that we would leave one day.

“Where do you want to go?” she asked each time.

Hemingway with Lady Duff Twysden, wife Hadley Hemingway, and others in Pamplona, Spain, July 1925. Lady Duff was the model for Lady Brett Ashley in the Sun Also Rises.

Jake, the protagonist in Hemingway’s novel, loves Lady Brett Ashley but cannot make love to her because of a war wound. An English professor at Chapel Hill suggested that Hemingway named his protagonist after Jacob, a patriarch of the Hebrew people, who wrestled an angel and, in doing so, received grace. Lady Brett Ashley loved Jake but could not be faithful to an impotent man. The final lines of the novel:

“Oh, Jake,” Brett said, “we could have had such a damned good time together.”

Ahead was a mounted policeman in khaki directing traffic. He raised his baton. The car slowed suddenly pressing Brett against me.

“Isn’t it pretty to think so:” Jake’s acceptance. Jake’s grace.

There are many excellent travel blogs, a million too many to read. This summer I followed a blog, Red Dirt Lattes. Sabrina, the author and photographer, chronicles her family’s summer travels, but her posts reach back in time to other places she’s lived. Her husband works for the U.N., so they move often. Sabrina links to other expat’s blogs, and the links form mazes like the back alleyways of Venice, Cairo, London, and other foreign villages in which I’ve become pleasantly lost. It’s not the same as traveling, of course, but it’s a nice way to pass some time.

What if, when I asked Lauren to promise we would leave Charlotte, she said, “Let’s go now!”? We could have had a such a damned good time together.

But we have had such a damned good time together.

We are in our mid-40s. We have three sons. They are growing up, fast. We have a mortgage, jobs, decent health insurance, grandparents in town, soccer and baseball and basketball and football and wrestling teams, responsible babysitters, friends, a good school, two dogs, two geckos, one frog. We get to travel, often with the boys and sometimes the two of us, and then we come home. I am happy.

I cannot remember the last time I asked Lauren to promise we would leave Charlotte.

The shuttle bus moves through the parking lot, picks up a few early travelers (mostly businessmen) and passes through a gate onto the roadway for the terminal. My head bounces gently against the large window facing east to the sun, still rising.

Earlier this day, the sun rose over San Sebastian. Would it be nice to be there? Yes, it’s pretty to think so.

But on this day, as on every other day, the sun also rises in Charlotte.

Father. Husband. Writer. Teacher. Outdoorsperson. And something else... Forgetful?
View all posts by Malcolm W Campbell →
This entry was posted in Philosophical, Questions, Reading, Traveling. Bookmark the permalink.

10 Responses to The Sun Also Rises